But they won’t be watching 9JKL 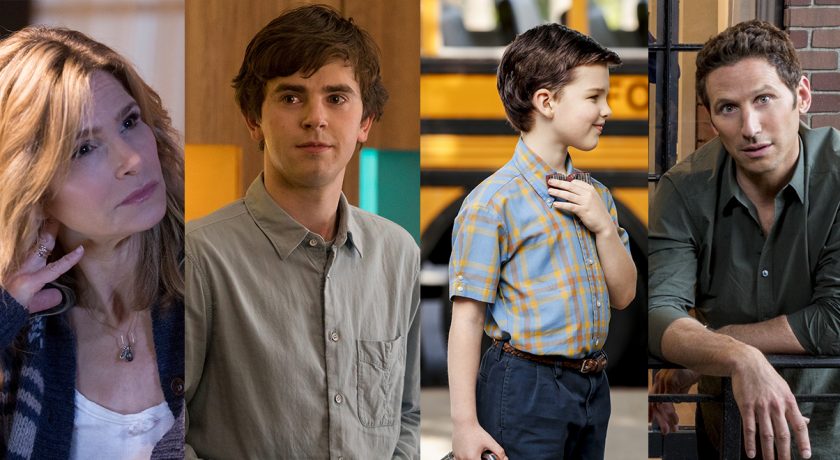 Ten Days in the Valley, The Good Doctor and Young Sheldon get a thumbs up from buyers, who didn’t like 9JKL.
Sources: ABC, CBS

Last week, Adweek looked at all 19 of the new fall TV broadcast shows to determine which ones are worth watching and most worthy of a media buy. As the new shows begin premiering this week, several media buyers have pointed to some of the same freshman programs as being the most likely to connect with audiences this fall: Young Sheldon, The Good Doctor and Ten Days in the Valley.

Beyond their top picks, however, there’s little agreement about the prospects for the 2017-18 season. While some buyers saying they’re more optimistic about the new fall lineup than they’ve been in ages, others deem this the most buzz-free freshman slate in a long while.

The safest, surest bet, according to buyers, is the Big Bang Theory prequel Young Sheldon, which is CBS’ attempt to turn TV’s most-watched series into a franchise. The comedy features Jim Parsons’ Big Bang character, Sheldon, as a 9-year-old growing up in East Texas in 1989.

“I rolled my eyes when they first said it was going to come on,” said Betty Pat McCoy, svp, managing director and director of investment, GSD&M. “But it’s actually touching. It reminds me of The Wonder Years. I think that will do well.”

Carrie Drinkwater, svp, group director of investment activation, Mediahub, agreed. “That’s a great option for clients to take a bet on,” she said

The only potential stumbling block, McCoy said, is CBS’ decision to not air a second episode of Young Sheldon until Nov. 2, a move that even CBS Entertainment president Kelly Kahl admitted was “unusual” for the network. “That gets you a little bit nervous that people may have found other programs and they’ll miss it,” McCoy said. “But Big Bang is so strong that I think that people who watch that will want to check this out.”

Several buyers were also optimistic about ABC’s The Good Doctor, which stars Freddie Highmore as a fledgling surgeon with autism and savant syndrome. “This one was a bit unique,” said Nick Hartofilis, evp of national investment, Zenith. “The concept of developmental disorders and characters has been applied to TV, but this felt like a deeper dive, which is compelling. If the writing holds up, that could have real staying power for that network.”

Another ABC drama, Ten Days in the Valley, starring Kyra Sedgwick as a TV producer and single mom whose daughter goes missing, also scored high marks from buyers. “There was a mystery and a bit of a twist to the character,” said Maureen Bosetti, chief investment officer, Initiative. “I thought the acting and the production values seemed really good, and the storyline was very intriguing versus a procedural storyline. It’s in the vein of shows on a Netflix or a Amazon that have more intrigue and mystery to them, which could be successful for a broadcast TV program.”

Drinkwater said she was excited for the return to TV of “great actresses” like Sedgwick and Edie Falco, who stars in NBC’s Law & Order True Crime: The Menendez Murders.

Buyers also were generally optimistic about the revival of Will & Grace. But McCoy said her office is “mixed” on the show. Those who watched the original run are excited for its return, but younger staffers are immune to its nostalgia. “I’m going to love see whether they can get those younger viewers to watch it like we used to,” McCoy said.

CBS’ Wisdom of the Crowd, starring Jeremy Piven as a Silicon Valley magnate who creates a new crowdsourcing app to help find his daughter’s killer, had the most divisive reaction among buyers, who either loved it or loathed it. Hartofilis gave it a thumbs up. “That was the pilot that felt like it had the best mix of ingredients like talent, potential chemistry, originality, relevance,” he said, “but the major question with that one, and this is going to be the major question with any of these shows, is it going to have legs, and how is the story going to carry through?”

From the best to the worst

On the other end of the freshman spectrum, buyers are wary of CBS sitcom 9JKL, which features a newly divorced actor (Mark Feuerstein) moves back home to New York and into an apartment between his parents (Linda Lavin and Elliott Gould) and brother and sister-in-law (David Walton and Liza Lapira). One buyer called it “one of the worst shows I saw. It’s not a comedy. It’s not a strong show at all.”

Other shows raising red flags, with buyers calling them “terrible”: CBS sitcom Me, Myself and I—which shows three parallel periods of the same man’s life: as a 14-year-old in 1991, a 40-year-old in the present day (Bobby Moynihan) and a 65-year-old in 2042 (John Larroquette)—and ABC drama Kevin (Probably) Saves the World, starring Jason Ritter as a troubled man who is told he is the world’s last “righteous soul” and has been chosen to restore balance to the planet by finding 35 other righteous souls.

No other new shows were deemed “terrible,” but buyers lamented that in too many cases, broadcasters were playing it safe, as if they were trying to avoid losing their current viewers rather than attempting to attract new ones with innovative fare. “If any of us took a blind sampling, we would clearly identify which shows are the broadcast shows,” said Hartofilis. “They’re fighting for that same group they’ve always been fighting for.”

Bosetti agreed that many of the fall and midseason comedies “feel a little been-there, done-that. We’ve seen this storyline before. They feel like a lot of other sitcoms. Comedy has been a real challenge lately.”

While a hit show could still emerge, “more than any other year, there’s the least amount of buzz in terms of our folks here and the clients,” Hartofilis said. “There wasn’t a This is Us [last fall’s instant breakout] where everyone is like, ‘Oh man, I can’t wait until that comes on.’”

However, Drinkwater disagreed and was more bullish on the prospects for fall. “I’m more excited than I’ve been in awhile,” she said, noting that “there was the most excitement from clients about content” rather than the frequent skepticism.

Other buyers are already looking ahead to midseason, when they said some of the most promising new shows will debut. “All of us loved Rise, which is a stronger Glee,” said McCoy of the NBC series about a Pennsylvania high school drama department. “That looked really good and would appeal across all ages.”

Ultimately, buyers are hopeful that they’ll be pleasantly surprised by the new crop of shows as they try to find an audience in the coming weeks. “Everyone is pulling for a great season and for ratings,” Drinkwater said. “Advertisers, agencies and networks hope that their content will bring people back.”

This article was originally published on Adweek. Read more.